Electrolysis of brines with chlorine production at the anode and hydrogen together with sodium or potassium hydroxide at the cathode.

The diaphragm cells contain a porous asbestos diaphragm to separate the anode from the cathode. This allows ions to pass through by electrical migration but reduces diffusion of products.

Anodes are graphite or Titanium (DSA).
Cathodes are made from steel wire.

If OH* reach the anode hypochlorites are formed with subsequent loss of chlorine.

The oxygen will attack the graphite and chlorinated HC are entrained in chlorine gas.

In a mercury cell, brine is partly decomposed in the electrolyzer between a graphite anode and a moving mercury cathode forming chlorine gas at the anode and sodium amalgam (NaHg) at the cathode.

The amalgam flows to the decomposer box where it becomes the anode to a short circuited iron or graphite cathode in an electrolyte of sodium hydroxide solution.

Chlorine leaving the cell is cooled down by water, dried with sulfuric acid, compressed and liquefied.

Problems To Solve
Filters are installed after drying tower or after the liquid seal compressor to collect sulfuric acid mists which: 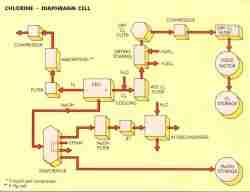